Fancy making #BethanyBuzz bigger than ever? Ms Haskell is looking for creative pupils to take something little and make it BIG. This summer Wild in Art is taking over Manchester city centre, with 85 super-sized, two-metre high Bee sculptures decorated by regional professional and emerging artists from Manchester and further afield.

Pupils can submit up to two designs by 12th February to be painted on the model. If chosen, you will be paid £850 to paint it for real and have your work part of the exhibit in Manchester.

From Wild in Art

Over eighty giant honey bee sculptures will be winging their way to Manchester next summer when the city lands one of its biggest ever public art events. The Bee in the City world-class sculpture trail is inspired by Manchester’s celebrated worker bee emblem which has been part of the city’s heraldry for over 150 years and is synonymous with Manchester’s pioneering and creatively industrious spirit – pollinating progress and renewal.

The Bee in the City trail will be on display throughout the city for nine weeks from July to September 2018 for Mancunians and visitors to enjoy whilst taking in the city’s landmarks, cultural gems and areas they may not have explored before. Each super-sized bee sculpture will be decorated with its own unique design, created by regional professional, emerging and amateur artists – making an unforgettably stunning spectacle when the trail goes live.

Sir Richard Leese, Leader of Manchester City Council, said: “The bee symbolises the industrious, creative and energetic spirit of Manchester and its people. Bee in the City will build on Manchester’s reputation for innovation and the role that culture plays at the heart of city life. This accessible event will encourage Mancunians and visitors alike to explore the Bee trail next summer. It’s sure to be a memorable and enjoyable spectacle and the Council is pleased to be backing this special event.”

If you would like to take part, see Ms Haskell in Art for sheets to submit your design. 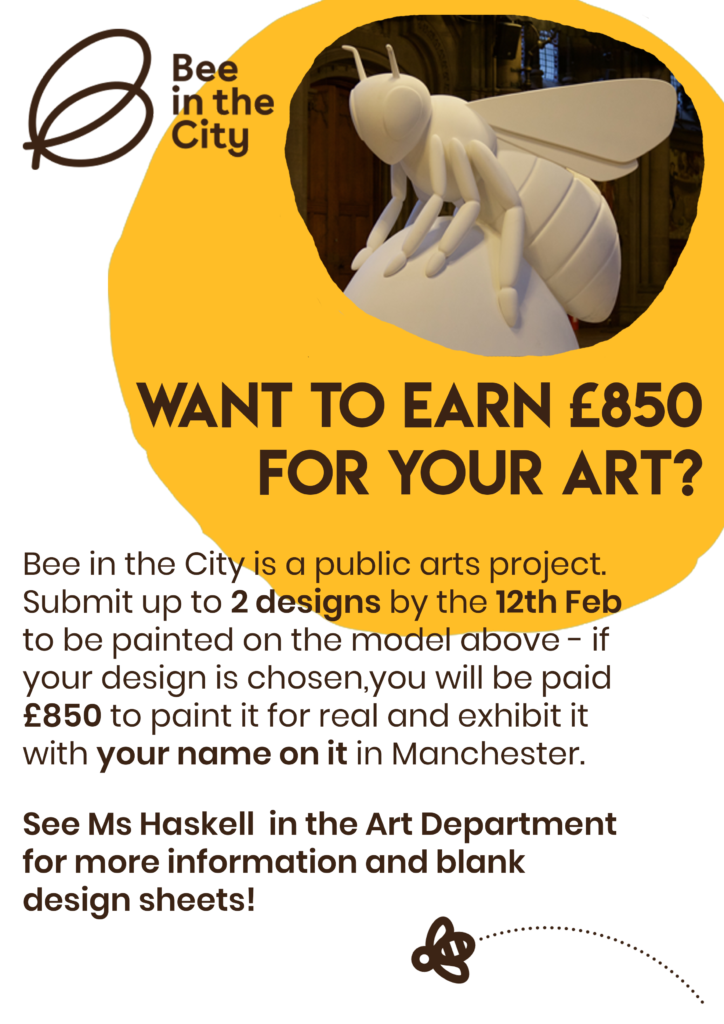